Camp Mazinaw opened in the 1940s and was located immediately south of the current Bon Echo Provincial Park on the old Highway 41. Initially it was a 6 week camp for 60 boys and was in operation for about 50 years.

The founder was PK Hambly who purchased 3 separate properties and opened the camp in 1940. Times were tough so cutting lumber supplemented the camp income.

The highly respected camp made a significant impact on many of the boys lives. Several notable men have fond memories of their summers at Camp Mazinaw. One of the most recognized campers would be Steve Paikin (The Agenda with Steve Paikin)... and more importantly, our very own Jim Smart of Smart's Marina.

In the 1930's it seems the camp was located where Bon Echo Park is now. Bob Reid found this video from July 1931 showing a floating diving tower and a bunch of campers having a blast. After posting, Bob received the following note from Rex Tavlor:

'The first Camp Mazinaw was located where Bon Echo Provincial Park is now. I don't know the exact years that it operated. However, after it closed, the camp we all know was started and in a different location. My memory says that it's first year was 1939, but it might have been 1940. And, of course, completely different ownership. There was a diving tower in the early years of Camp and it might have been the same one as in this movie. I remember Brian telling me that when it fell apart it was not replaced.' 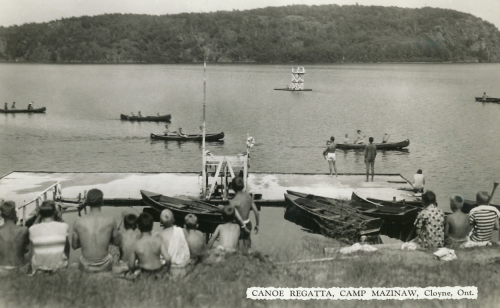 If you would like to see more about the Boys Camp, check out Cloyne and District Historical Society